Halloween III: Season Of The Witch

When They Cry: Higurashi

The Watcher In The Woods

Something Wicked This Way Comes

The Nightmare Before Christmas

The Legend Of Zelda: Majora's Mask 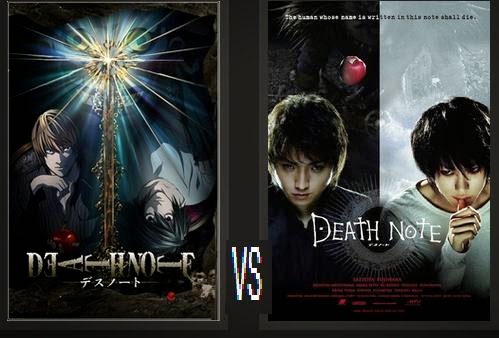 I've always stood by the rather unpopular opinion that the Japanese made live action movie duology  "Death Note" and "Death Note: The Last Name" is by far the definitive version of the "Death Note" story.  The original manga was an excellently written crime/horror/psychological thriller story but it had it's bumps and got really lame at the halfway point and dragged out the story until the end because the mangaka wanted to end with a particular "ironic" number of chapters, but at least the ending to the story was immensely satisfying.  The anime adaptation, on the other hand, threw out all sense of dignified subdued plot action in favor of over-the-top, "What Do You Mean It's Not Awesome?" theatrics and melodrama, including overwraught plot or characterization points made up for the anime to make Light and L come off as more sympathetic characters than they really were.  And the ending got outright tampered with so that Light could get a sadder, more dignified (though still pretty pathetic) send-off.  This made the anime sometimes enjoyable but othertimes unwatchable, and it led to many fans getting the wrong idea about what the series really was.  So I gave thought to the reasons as to why I think that from an adaptation standpoint, the live action movie handled things better than the anime, and from a storytelling standpoint, handled things even better than the manga!  I wrote a forum post on the matter, and here it is:

More subtelty than the anime's overdramatic-ness. Overdramatic only worked a few times like when Light was first writing names in the Death Note, or in the final episodes. The manga was never as narmy and melodramatic as the anime was. (Take Light's room for example; we never get a good sense of what it looks like in the manga and in the live action films, it's a normal room. But in the anime, it's constantly dark and dimly lit because Light is eeeevil.) We're not talking about "Code Geass" here, "Death Note" was not meant to be bombastic and hammy. The movies were more true to the manga in being more subdued.  Now it's fine for people to enjoy overdramatic hamminess if they like it, but I got annoyed with the overdrama after a while simply because it got so gratuitous.

Light's fall from grace was more convincing and well done. It happens over the course of the first film. Even if he declares he'll become ruler of a new world early on, he's clearly of righteous intentions at the start and seeing how bad the criminals are, we sympathize with him. But then he kills Lind L Taylor out of spite. He later gets Raye Pembar to kill a bunch of FBI agents before killing him. Then there's the ending with Naomi Misora and his own girlfriend, Shiori, which is where he completely crosses the line into pure evil territory. And he just keeps going from there in the second film, even being willing to kill his own father for the sake of his plans.

L not being shown for awhile. In the manga and anime, we cut away to him at his computer a couple of times but never see his face until he's properly introduced to the task force. In the movies, we don't even see that. He's just a letter on a screen and a high pitched computerized voice until we meet him. I thought they made him alot more mysterious that way and gave his reveal more of an impact.

Raye Pembar and (especially) Naomi Misora were handled better. Raye wasn't a chauvinistic fool this time, and the imfamous sexist way they did in Naomi was avoided by changing the climax so that the circumstances of her death were beyond her control and she wasn't made to look like an idiot.  Okay, so she was kind of an idiot but I'd say the romance with Raye and devestation she felt when he was taken from her kind of rationalizes the foolhardiness. But even then, she only went as far as to shoot an innocent girl because Light manipulated the situation into happening because she let slip she was using a fake name, not knowing how smart Light truly was. And at the very least, her character was consistent, as opposed to the manga/anime Naomi being a strong, intelligent woman and as competent as L as tracking Kira only for her to be handed the Idiot Ball in order to do away with her. Naomi in the movies never got such Character Derailment.

The hidden cameras/potato chip scene being moved between Raye and Naomi's death. I liked that for some reason.

The "second Kira" incident being changed into a singular, terrifying event. It helped pick up the pace and made the idea of the second Kira as a threat more convincing.  In the manga and anime it went on for awhile and though the Second Kira was scary at first because h/she seemingly had no ideals and could kill a person more easily by seeing their name and lifespan, it became apparent all too soon that h/she wasn't truly as smart or dangerous as the one, true Kira. And we learn this before we know the identity. Here we're kept in the dark about what sort of trouble the Second Kira will be until Misa decides to meet Light in person and fess up.

Misa's character coming off as less shallow, mostly because her parents' murder was kept as a big aspect of her character. In the manga and anime, it's merely an excuse as to why she supports Kira when she first joins him. But since it's then never brought up again, her unwavering loyatly to Kira and Mad Love for Light came off as just her being a needy and irritating Fangirl. I mean, Misa's my favorite female character in the series but I was still often disappointed with the way she was handled from the Yotsuba arc and onwards. In the Yotsuba arc, she had no reason to be all clingy and say "I couldn't live in a world without Light" because the whole reason she was devoted to Light in the first place was because he was Kira and she didn't remember that!  It just made her seem too shallow and stupid.  But movieverse Misa was always fresh and well characterized.  I also like how she clearly sees what an evil monster Light is in the end but still says she loves him "no matter what he is." Very Harley Quinn-esque.

Kiyomi Takada is a better character in the movie. Easier to sympathize with despite her fall into becoming a selfish murderess.  As someone else put it "Takada in the original canon is bladness incarnate, if blandness incarnate purveyed propaganda".  Yeah, I mean, aren't propaganda spouters supposed to have more charisma?  Not to mention I hate killer sympathizing, propaganda spouting liberal media people to begin with, so being bland on top of that wasn't winning me much love for her. When she died in the original, I was more saddened by the circumstances of her death than the loss of her as a person.  Not so in the movie, where I was actually kind of outraged that she got offed while that annoying slimeball Demegawa was never shown meeting his demise.

Heck, the whole thing's less sexist in general. Naomi, Misa, and Takada are much more than what they were in the manga/anime, Shiori's a major character in the first film, and there's even a female member on the Task Force this time, and she doesn't feel tacked on at all.  The original creators of "Death Note" have some form of chronic sexism, as their later work like "Bakuman" showcases.  So, when it comes to female characters, things work out better for them in more caring, capable hands.

Souichirou Yagami keeping more character focus. In the anime and manga, I felt like he lost a good deal of importance once Light joined the force and L was there in person. He never fades into the background here.

Souichirou finding out that Light is Kira! Seriously, that he never found out in the manga/anime disappointed me to no end, since it ruined all the potential set up with the character and his relationship with his son. And I also liked that he lives in the end. I personally felt that the Yagami family losing BOTH men of the family was a bit much. I know the point is that Light brings tragedy upon his family, but don't push it.

The entire ending. L finishes the job himself by taking advantage of a Death Note rule and ensuring that he dies after Kira is brought down. Having L do it and finally confront Kira was much more satisfying than Near doing the job that L could've done anyway had he not died, and the way he did it was both brilliant and more simple than Near's way of catching Kira. And Light actually loses by getting outsmarted in this little chess match, not because of a fluke with Mello taking action that inadvertedly causes Mikami to slip up and give Near the opportunity to set up his plan to catch Kira. (I'm also perfectly fine with L outsmarting Light as opposed to the other way around because I always thought L was smarter anyway and the way he died was bullshit). We also get the same ending from the manga rather than the anime's one (thank goodness) but with L instead of Near and an extra level of tragedy added by having Souichirou there in the final confrontation and Light dying in his arms while STILL justifying his actions as Kira. Lastly, the self-sacrificing nature of L's actions and his acknowledging where he went wrong at times means that he finally got to be truly moral before he died, as opposed to being self centered to the end. His last talk with Soichirou was very moving, too.

And of course, the fact that the Mello/Near arcs get ommitted and the story ends at the point where it should. The only reason it got so stretched out in the first place was because the manga creators wanted a specific number of chapters, which led to a really crappy storyline that suffered greatly from Ending Fatigue.

There are things I didn't like or found inferior to other versions (Matsuda never really developed as a character, Rem's sex change was pointless, I miss some of the stuff that happened in the Yotsuba arc, and I miss Mikami) but overall, I think the movies' strengths over the other versions of  "Death Note" far outway the weaknesses. Look beyond the production value: beyond the movies' tacky looking appearace, wooden lead actor, and the CGI Shinigami, people. This is "Death Note" distilled to it's purest core.

And at least we can all agree it's leagues ahead of the Netflix adaptation!
Posted by Eric at 2:45 PM No comments: