What's Wrong With This Picture?

The upcoming installment in the "Kingdom Hearts" series, "3D: Dream Drop Distance", is as my brother has said, the first KH game to come out after the series has officially made its' jump over
the shark. Now that may seem unfair seeing as the game's not out yet, but all the trailers and all the promotional material has given us more than enough evidence that this game signifies that the series is lost beyond all hope now. Going over what is known about the game so far, I've made a laundry list of the few things I feel looks right about this game and all the other stuff that I think is wrong with it:

- "Passion/Sanctuary" might just be used again in this one, rather than "Hikari/Simple and Clean" for the nth time. Such a relief, as I'd grown sick of the cheapening of that song by "Birth By Sleep".

- Riku doesn't seem to offend me too much.  If he ends up having good playability and being written more like Terra instead of his sullen persona of "Chain of Memories" and "Kingdom Hearts II", then he'll have things "the best in a bad situation."

- Riku and Mickey, aaaaaw.  We see Riku smiling about musketeer Mickey and interacting with sorcerer's apprentice Mickey.  Just give him the actual King Mickey to talk to again and I'll be happy.

- A Fantasia world sounds kewl and actually fitting for a "world in sleep."

- Xehanort summoning CHERNABOG? Oh, this had BETTER be good...

- More insight on "the past" with Xehanort's betrayal of Ansem and how he opened his world's door.

- Frollo. Just Frollo. Fighting and beating him up has been a dream of mine ever since the series began, and depending on how it's done, it will determine if I give this game a try or not.  I could rent the game JUST to play up to that point and fight him as much as I want to! Don't fuck this up!

- Instant pretentious light/darkness dialogue opens the trailers and appears to be the tagline.
"Light falls into darkness, darkness becomes light"....UGH.

- Needlessly nonsensical plot alert! "Worlds in sleep?" "Dream Eaters?" Realities within dreams within dreams?  THE FUCK? I don't know all the details and already I'm confused!

- Dream Eaters replacing Disney allies. This one was obvious.

- Sora and Riku starring in a game side-by-side together. They already had an epic final battle for that; an entire game just seems like Yaoi Fangirl Bait to me.

- Sora's appearance and Riku's haircut are stupid. Sora has an ugly looking model with an ugly outfit that seems to have taken basis from Vanitas' colors. And Riku's cut a whole layer of his hair and it just looks wrong. Bleah.

- Riku is the deuteragonist again, which is a role he does not work as. Then again, I don't really like Sora as the protagonist anymore either, yet you have to play as them both! WHY?

- Joshua's pretentious ramblings. We do not need to hear light/darkness rubbish coming from HIM.

- Neku being emo. Never liked Neku and his emo-ness, so I'm not at all pleased to have him in KH.

- Rhyme's Memory Loss. God, I am so SICK of this plot point that Nomura is all too fond of recycling.

- More Neku/Joshua pretentiouness with references to their own story straight out of "The World Ends With You." We could very well have the next Cloud/Sephiroth fiasco on our hands.

- Maleficent and Pete seeming not very credible as villains, while the Disney Castle folks seem too ridiculously stiff and serious. Guys, you're classic cartoon characters! Lighten up!

- For that matter, why's Maleficent in Disney Castle? Shouldn't the Cornerstone of Light keep her out? THIS AIN'T POSSIBLE!

- More Dream Eaters. They've been called "Pokemon on crack", but honestly, I really can't see much of a difference between them and a lot of regular Pokemon these days. (*drumroll*)

- The Mysterious Figure in that trendy black coat. Yeah, the "Unknown" coat has lost any meaning it ever had. It's just a pretentiously dark, emo fashion fad now.

- Dream Drop Distance! So we're literally dropping into dreams? I think I want the Gummi Ship back!

- There seems to be only five new playable Disney worlds and only one of them seems any good.

- The Tron Legacy World and The Vanitas Rinzler. It makes no sense to have this world and it's characters "in sleep" without connecting it to Space Paranoids in any way, and no sense for Rinzler to be here when he's both Tron AND way too much like Vanitas! His fighting stance is even similar!

- Sora's "Inception" rip-off scene on the beach. Nomura, you're REALLY going there?

- "Pinocchio" gets a world with the plot straight from the movie!

- "Mickey, Donald, & Goofy: Three Musketeers" gets a world with the plot straight from the movie!

- "The Hunchback Of Notre Dame" gets a world with the plot straight from the movie, complete with those three irritating stone gargoyles! AAAAAH!!!

- "All for one and one for all!" with the three musketeers and the awkward original character out of place.  Look, that works between Sora, Donald, and Goofy, but THIS isn't "the Four Musketeers"!

- Riku faces Ansem at the burning Notre Dame cathedral with no clownish hunchback in sight!

- Sora confronts Xemnas at Prankster Paradise with no clownish puppet in sight!

- We have TWO France worlds that weren't combined!  I mean, think about how awesome it would've been if the Disney characters (Mickey, Donald, Goofy, Minnie, and Pete) had been in the Notre Dame world in their "Three Musketeer" guises, engaging in their own little subplot while the Hunchback events were still going on?  Wouldn't that have been a cool world?  But no, we're getting two French movie knock-offs instead. And yet we never got a French world that featured Gaston!?

- Monstro AGAIN?  I can only hope that the whale's inside design is slightly improved.

- Another Riku in a black coat. And to add insult to injury, HE has Riku's GOOD hairstyle! Is this somehow the Jiminy's Journal Riku or something else entirely? If it's the latter, than there's NO EXCUSE for him to be wearing the black coat other than its' trendy dark, emo fashion statement!

- Yen Sid being Mr. Exposition again. Just when he seemed to be becoming more important.

- A Mark of Mastery is totally unneeded. It's an outdated tradition that caused nothing but trouble, and Sora and Riku have already proven themselves.

- Where in blazes is Kairi? She specifically said in KH2 that she would no longer just "wait" for Sora and would always stick with him from now on, but now she seems to have taken that back and is staying back on the islands while the boys go do their thing. Even if she's not too good with the keyblade, there's no reason she can't just come along as a spectator. Ventus did it, so why can't SHE? What's with the sexist douchebaggery, Nomura?

-The Organization characters' past selves are back. Look, whenever I said that we should be done with the Organization, I meant that PERIOD. Bringing them back NOT as the Organization just makes them more useless. The only one with any sort of excuse to be back would be Xehanort and Braig. Everyone else...NO.

- "Lea" is a TERRIBLE CHEAP ASS CHARACTER. It's just Axel without his cool facial markings,
a personality that just rehashes everything fans love about him, but with no charm, appeal, or effort at all. Axel was a great character who went through severe shifts and derailments of his characterization through three games: Lea is just walking, talking Fanservice.

- Lea comes in to drive Maleficent away and says "Got it memorized?" with a wanky face. FAIL.

- As has been sadly true of this series for the past three games now, Disney is unimportant window dressing while the original storyline and characters are self-contained. You could put the events that transpire between Sora, Riku, and Xehanort in any backdrop and it wouldn't matter. With Disney not really mattering anymore, the original story arc for this series has just become so damn boring!

- Disney is still used as a marketing device. There's little to no Disney magic to be seen in this game, yet (like "358/2 Days")  they slap Mickey on the cover so that Disney fans will buy it and be totally shocked and disappointed in the dull original experience that they actually get out of it. Tacky.

- There's no Final Fantasy guest stars in sight, yet the entire main cast of "The World Ends With You" is present as guest stars. That is just dumb, dumb, dumb on so many levels.

- If Xehanort is only back because of some Ass Pull rule about the order in which you kill someone's Heartless and Nobody, then he probably shouldn't have bothered returning from the grave. Whatever stupid evil plan he has now will only reinforce this.

- Xehanort brings out Vanitas through his darkness and hammers in "Lol, other hearts are banging in Sora!" The Notre Dame keyhole appears after he leaves! With no clownish hunchback in sight!

- Why is Mickey in his sorcerer robes NOW?  He should've been wearing that in "Birth By Sleep",
as opposed to that monochrome version of his regular king attire.

- We see fucking Xion again! AAAAAAGH! Nomura made me tolerate and even like Tomoko Kanamaki's fanfic Sue creation before, but now he's making her worse!  Everyone forgot about all her
in the end! She's as dead as it's possible to be! Bringing her back would be just unbearable.

- We see Axel and Roxas eating ice cream and being "gay" again. I have no other comment.

- Roxas talks of Axel "being there to bring him and Xion back" and says "got it memorized?" too. Guys, the catchphrase was lame when Axel said it; why'd you go and make it even lamer?

- Lea wakes up and is just Axel without his markings. Odds are, his mission in this game is going to be all about "bringing Roxas and Xion back". Pathetic. Just pathetic.

- Mickey's still being too stiff and serious! LIGHTEN UP, MOUSE!

- Xigbar repeating the memetic "drowned goldfish" line to Sora who is Roxas who is Ven. Gah!

- Xigbar being XIGBAR! Why isn't he back as Braig? Is he taking a huge step backwards here?

- Lots of Xehanorts together in one place? What is this, a Xehanort reunion? Will the real Xehanort please stand up? Master Xehanort, what the Hades are you even doing with your new life?

- Xehanort cheesily imitating Riku's gesture 'cause lol, he's from Destiny Islands and was like Riku. 'Sigh' I was hoping that WOULDN'T become a pivotal plot point for the main forefront story.

- More armor and black coats seem to flash by. Again, they have no meaning whatsoever.

- The Total Mindfuck occurs in all of these trailers and I'm guessing the whole game, too. This series has officially reached the point of no coherence. 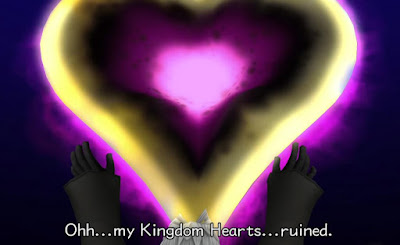