The Legend of Korra

Okay, I just got done sneak previewing the first two episodes of "Avatar: The Last Airbender"'s sequel series, "The Legend of Korra" and I'm blogging my thoughts on the show thus far here:

Let's get the most obvious thing out of the way first:

Seriously, check out how well built she is! This may be the hottest girl in the franchise by far. And if you dare say you cannot be attracted to this cartoon character, you're lying. There's a reason she's
a Memetic Sex Godess, guys.  Everyone is Korrasexuual, even you! But not only is she hot, she's utterly adorable, she's got a great attitude, an interesting characterization, superb animation, skilled badassery, and great voice acting.  Just two episodes in and already Korra is a very likable main heroine. If her character development ends up solid (which it most surely will), she'll officially be right up there with Katara and Azula as a favorite female character in the Avatar world.

Personally, I love the idea for this series and the direction Mike and Bryan are taking with it is absolutely the right way to go in my opinion. "Avatar: The Last Airbender" was such a magnificent animated epic, why should it have a sequel that would try to imitate, live up to,
or even surpass it's legacy?  Mike and Bryan must've realized that it couldn't, so the sequel series
is changing it's gears completely. Instead of an epic fantasy story stretched across three seasons, we're getting a modernized "Batmanish" show that revolves more around the characters and their setting than it does any overall plot, since there will be no overall plot this time: just different story arcs per season. The fact that it's set years into the future past the original show also gives it it's edge and we get to have an all new cast of characters with new stories to be told with them. While I'm liking "The Promise" as a bridge between the two series' that establishes the founding of Republic City, I think it also shows why it's best to let old casts and their stories go. There's just no more room for good development with them because their character arcs were resolved in the show itself: what we get in the comic is either the same old shit the characters usually did in the show (Sokka's jokes and Toph's snarks), stuff that we'd rather not have seen past its' resolution (Kataang couple), and rehashing of development that characters have already been through  (Aang and Zuko's conflicts respectively). Bringing in new characters, settings, and stories ensures that things are kept fresh.

I also love that they've decided upon the title just being "The Legend Of Korra." While we all know that the title is meant to be "Avatar: The Legend Of Korra", that James Cameron turdfest movie made use of the title "Avatar" forbidden despite the fact that the original show used it for it's entire run four years before James Cameron's movie ever came out. But thankfully, they chose not to go with the working title "The Last Airbender: The Legend Of Korra", which would make no sense whatsoever seeing as there is no "last airbender" anymore and it would make the series sound too associated with M Night Shyamalan's sub-par live action adaptation. So compared to that, the simple title we've gotten is good enough.

The animation for the backgrounds, characters, bending and action sequences, all that stuff...it's phenomenal as always. And the style and mood they've set for the show is great. It still feels very Asian, but much, much more modern, with Republic City being a clear Expy of New York City itself.  (Y'know, since Team Rocket's fight against Team Plasma is still postponed, maybe they should invite Team Rocket over to Republic City so that can terrorize it while duking it out with the Equalists instead.)  They've now got automobiles, planes, cameras, radios, newspapers, and much more modern conveniences. All we need to see now are phones and TVs and it'll officially be a nice place to live in. 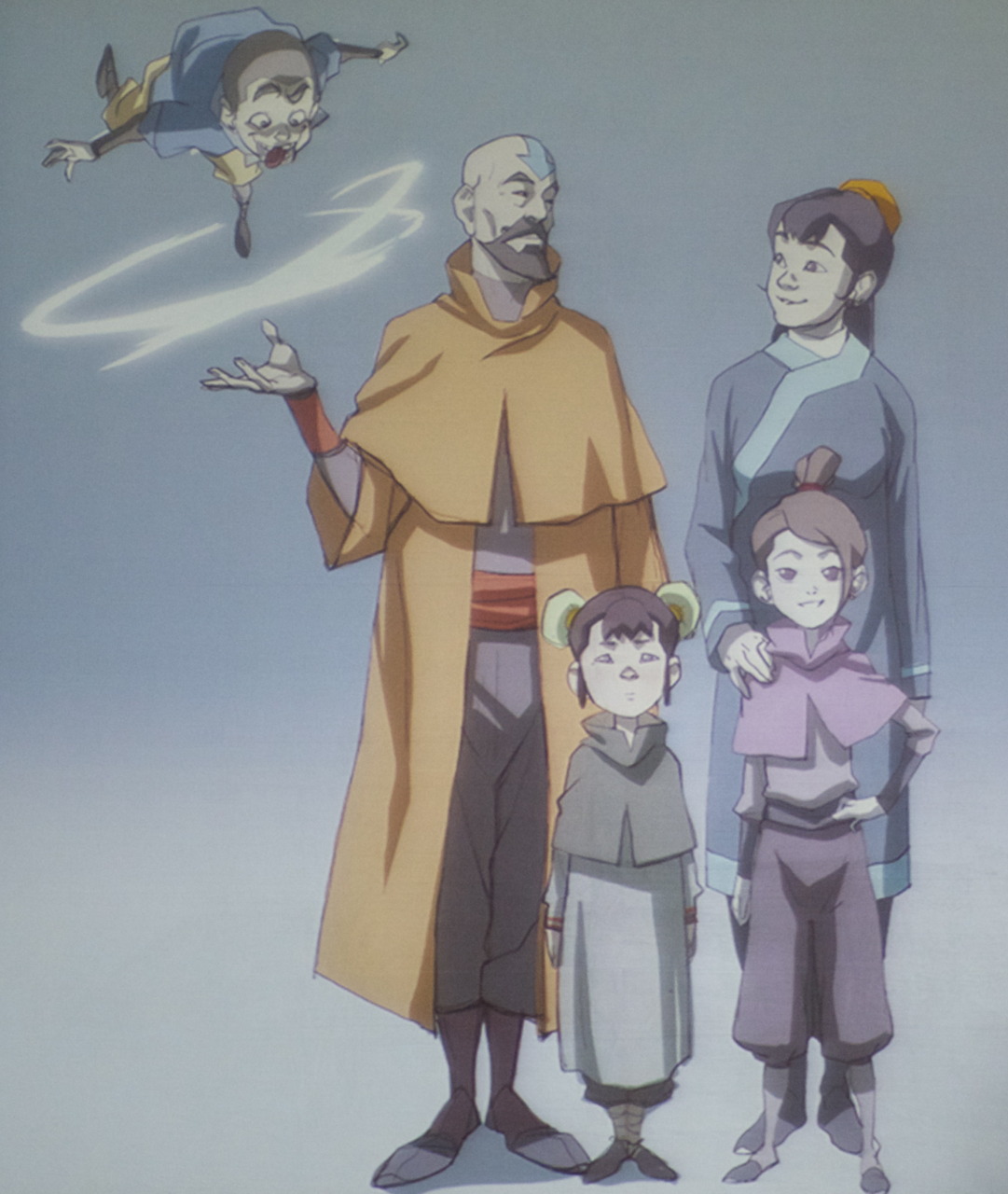 I love the Tenzin character and his family. Tenzin being the full grown son of Avatar Aang is interesting enough but his characterization is engaging too. He's a great stern, uptight, serious, wise and dignified man with a strong belief in how things should be done but he is also a wonderful comically serious character, being made the butt of several great moments of humor in the show while still being able to maintain his dignity despite that. You just gotta love him, and the voice acting by JK Simmons helps alot. His overactive kids and envious "normal" wife are funny too. I can't wait to see more of this family in future episodes.

The metalbending police force of Republic City are hardcore badasses, being led by a badass captain voiced by Richard Epcar, who in turn works for the badass chief, Lin Bei Fong, Toph's grown up daughter. I love what little I've seen of this stone cold, hardass bitch. I wonder what is was in her childhood that made her grow up to be the total opposite of the rebellious Toph, but it makes for an interesting character conflict when she has to deal with the rebellious Korra. Bei Fong is entirely right that Korra shouldn't dish out vigilante justice if it means causing damage to the city and that "I'm the Avatar" should not be a get-out-of-jail-free card. However, Korra is right in that helping out in her own way rather than relying on the cops is what she as the Avatar should do, and that Bei Fong should be a bit more tolerant towards her seeing as she IS the reincarnation of her mother's friend. I hope this dynamic goes places and the two of them end up like Batman and Commissioner Gordon by the next season rather than staying enemies.

Pro-Bending, as has been stated, is right up there with Quiditch and Blitzball with cool fantasy sports that we wish existed in real life. I enjoyed every minute of it in the second episode, the way its' animated is great, and now that Korra's joined the Fire Ferrets team alongside Mako and Bolin, I'm eager to see more of it. Speaking of Mako and Bolin, those two brothers seem like interesting characters too. Mako acts kind of like Zuko while Bolin acts kind of like Sokka, making the Zuko/Sokka "brotherly" dynamic more apparent. Bolin is amusing without going too over-the-top (yet), and while Mako may need a serious attitude adjustment, the guy's kick-ass. The way he implemented a brilliant strategy to take out all three of the opposing team members by himself was incredible! Looks like there's going to be some "relationship drama" between him and Korra down the road. And thus another shipping nightmare shall begin...

And while on the subject of Pro-Bending, how about Anti-Bending? (Geddit?) The Equalists seem like very intriguing antagonists for this first season's story arc. Their arguments for why bending should be abolished so far actually make a good deal of sense, but with these sorts of anti-whatever revolutionary union groups, I have to wonder about their real motives. The mysterious evil leader, Amon, interests me greatly. He's only shown for the last few seconds of the first episode and is all over the promotional ads, and already he's a really cool villain. He seems to have a natural charisma, wears a creepy yet inspiring looking mask, and has the voice of Yamaki from "Digimon Tamers".  If he gets alot of supporters, I wouldn't blame them. And from the looks of things (especially the "I will destroy you" nightmare bit on the trailers) he looks to indeed be
a very frightening enemy for Korra. But what could he possibly be concealing behind that mask?

Lastly, there's a character that has yet to appear that I am really eager to meet. No, not Dante Basco's character: we don't know who he even is yet. The character I want to see is named Asami Sato, the teenage daughter of a wealthy industrialist tycoon named Hiroshi Sato. From just the description of her character, I think I love her and am sure I can add her to my category of "Best Spoiled Bitches" that I've seen. Also, she's voiced by Sychelle Gabriel and since we know she's a Pro-Bending fangirl, she'll undoubtedly be siding against the Equalists. If we do not hear her at any point say "We'll show the Equalists that we believe in our beliefs just as much as they believe in theirs!", I will be immensely disappointed.

Oh, and of course, there was a tease about "the amazing story of what happened to Zuko's mother...but not yet!" towards the start of the first episode. That all but confirms that Mike and Bryan have something specific in mind for that plot point and it will be revealed either later in this series, or in a graphic novel, or maybe even both!

Cannot WAIT to see more of this show after it's premiere in April.
Posted by Eric at 4:53 PM